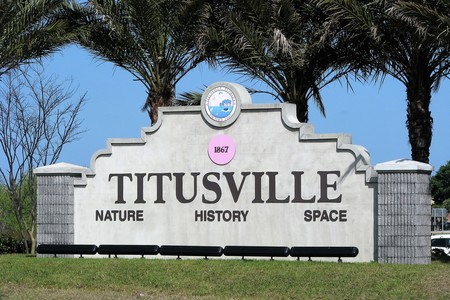 Titusville is the largest city in northern Brevard County and is just off I-95. It sits adjacent to the Kennedy Space Center and was at the heart of the booming space program beginning in the 1960s. Titusville is located along the Indian River, West of Merritt Island and south of the Canaveral National Seashore. It encompasses 34.19 square miles with 5.09 square miles of that waterfront.

Titusville is home to many shops and restaurants, schools, the Parrish Medical Center, a regional airport, and a thriving revitalized historic downtown area with many unique shops and restaurants as well as the Historic Titusville Playhouse and historic homes. The downtown area offers monthly themed block parties. Many major employers here are aerospace related. Knight’s Armament Company, a major employer, is believed to be the state’s largest manufacturer of small arms.

The Canaveral National Seashore, including Playalinda Beach is home to more than 1,000 plant species and 310 bird species. The 24 mile long beach is the longest undeveloped beach on the east coast of Florida. Playalinda was voted the 4th best beach in Florida in 2015.

Homes for Sale in Titusville

Titusville real estate consists of upscale estate homes, riverfront homes, single family homes, townhomes, condos and many historic homes.  Prices range from around $30,000 for smaller, older homes and condos to well over $1,000,000 for larger estate homes. The real estate market in Titusville was negatively affected by the end of the shuttle era and the loss of 8,000 NASA jobs in 2012 but has been resurrected by private companies around the Kennedy Space Center. It has rebounded in a big way. The city has a lot of development going on with new construction and new hotels and the real estate market is steadily increasing in value.

To explore what homes are currently on the market please use our SEARCH BREVARD MLS LISTINGS and select the city Titusville.  You can narrow your search by price, size and features.

Titusville sits adjacent to the Kennedy Space Center, and was at the heart of the booming space program beginning in the 1960's. Motels, schools, a public hospital, churches, golf courses and

Indigenous Peoples inhabited this area for thousands of years, dating to the early Archaic Period (6000 to 5000 BCE). An archaeologic site discovered in 1982 spurred the designation of Titusville as a National Historic Landmark.

Titusville was founded in 1867 by Confederate Col Henry Theodore Titus arrived ashore on the banks of the Indian River. The town was then known as Sand Point. He built the first hotel and named it The Titus House and he and his wife donated land for the first courthouse, 4 churches and many of the town’s streets. Col Titus and Capt. Clark Rice played a game of dominos to determine the towns new name. Col Titus won the game and resulted in Sand Point becoming Titusville.

Beginning in the late 1950s, the growth of Cape Canaveral and later the Kennedy Space Center stimulated growth, population and the economy.

Titusville is located in northern Brevard County, also known as Florida’s “Space Coast”.  Brevard County’s  72 miles of coastline and 71% of the 156 mile long Indian River Lagoon are what draws residents and visitors from all over.

Nearby Port Canaveral, one of the countries busiest cruise ports in the world, gives residents and visitors the opportunity to hop on a Royal Caribbean, Norwegian, Disney, or Carnival Cruise for 3 days or more!